Do you wonder what colostrum actually is? It is quite simple - colostrum is the very first milk provided by the mother to the newborn after birth. Read about the general definition of colostrum and its importance for neonates.

The mammalian newborn is highly sensitive after birth, as the environments suddenly changes from the protected sterile area in the womb with continuous feeding through the bird cord to the foreign microbe-rich environment outside with occasionally feeding through the mouth (Sangild et al., 2013). This puts high demands on the newborn’s immune system and digestion system (Newburg & Walker, 2007).

Colostrum provide the bioactive factors and nutrients necessary for the growth, development and maturation of both the immune system and the digestion system in the newborn. These high levels of bioactive compounds are the single most important feature about colostrum (Rathe et al., 2014).

The mother produce colostrum during the pregnancy, but stops immediately after birth, so the newborn only gets colostrum during the first 24-48 hours of life (Stelwagen et al., 2009). This short time of delivery makes the provision of colostrum to the newborn so much more important to secure in order to give the newborn the best possible start of life (Kehoe et al., 2007). After the first few days the amounts of bioactive compounds drops and the colostrum becomes common mature milk (Foley & Otterby, 1978). 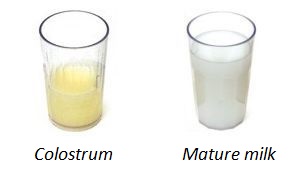 Milk matrix and contents in colostrum

Colostrum contains several bioactive factors. Some of the most important are immunoglobulins, growth factors, antimicrobial factors, anti-inflammatory factors, and bioactive oligosaccharides. These factors help growth and maturation of the immune system and the digestion system in order to protect the newborn against infections and other diseases. In addition, colostrum contains high levels of many different vitamins, minerals, carbohydrates, lipids and proteins (Kelly et al., 2003). Many of the bioactive factors in colostrum enhance each other’s effects, their molecules are linked together or they depend on each other’s presence in order to function properly. Whole colostrum with an intact so-called milk matrix is thus the most bioactive version of colostrum (Chatterton et al., 2013).

Even though the specific composition of colostrum varies between species, many compounds are similar among species. This means that colostrum from one species can be digested by another species and the beneficial effects can be transferred. Thus, humans can intake bovine colostrum and benefit from its high contents of bioactive compounds (Jensen et al., 2013).

The importance of the bovine colostrum is massive as it is the only source of passive immunity for the newborn calf. In ruminants, there is no passive transfer of immunity from the mother to the offspring as found in humans. During the gestational period, the placenta of the cow separates the maternal and fetal blood supplies, preventing the transmission of immunoglobulins and other bioactive compounds to the fetus in utero. Consequently, the calf is agammaglobulinemic at birth, and is thus born without immunologic compounds in the blood and a critically immature immune system. However, the colostrum provided by the cow after parturition is rich in immunoglobulins and other bioactive factors and nutrients to secure the survival of the calf (Larson et al., 1980; Weaver et al., 2000).

Most healthy cows produce colostrum in vast excess of the calf’s requirement and this surplus is feasible to collect and use for commercial purposes (Foley & Otterby, 1978). Bovine colostrum seems one of the very best choices for neonatal human infants in need of diet supplement. Several studies have specifically reported an absence of adverse effects, and bovine colostrum is considered safe and well tolerated (Rathe et al., 2014).

Bovine colostrum as therapy for human diseases and disorders

As colostrum is evolved to protect the newborn by promoting growth and development of the immune system and gastrointestinal system, it is virtually a natural immune booster. Extensive research has documented that patients suffering from different diseases and disorders related to the immune system or the gut benefit from intake of bovine colostrum as dietary supplement (Pereira, 2014). This includes immune related responses, infections, tissue damage, pathogen invasions, adverse effects from chemotherapy, adverse effects from intake of NSAIDs, diarrhea, gut problems, respiratory tract infections, preterm birth and more. Bovine colostrum can be used as an orally ingested diet supplement provided against a specific disease, as a generally immunological protection or as a treatment for adverse side effects. No adverse effects have been found so far (Struff & Sprotte, 2008).